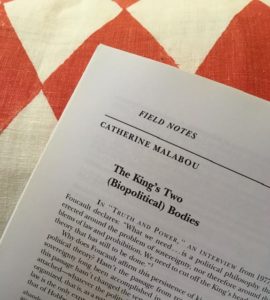 If, as Foucault wrote, “we need to cut off the king’s head,” our further task, according to French philosopher Catherine Malabou in a 2014 essay, is to “situate the point where biology and history, the living subject and the political subject, meet or touch.”

Bodies of Lenin: The Hidden Science of Communist Sovereignty
by Alexei Yurchak

During discussions a few years ago in the Duma about the fate of Lenin’s body, which is displayed in the Lenin Mausoleum on Red Square, Vladimir Medinsky, then a Duma deputy (and now Russia’s minister of culture), suggested that it was time to take this body out of the mausoleum and bury it in the ground. “Do not fool yourselves,” he explained, “with the illusion that what is lying in the mausoleum is Lenin. What’s left there is only 10 percent of his body.” The respected political weekly Vlast’ decided to check this figure. During the autopsy in January 1924, wrote the weekly, Lenin’s brain and organs had been removed. When Lenin was embalmed, his internal liquids were replaced with embalming fluids. Since organs constitute about 17 percent of human body mass, and liquids about 60 percent, Lenin’s body had lost 77 percent of its original matter. Therefore, concluded the weekly, the Duma deputy had gotten it wrong: what is lying in the mausoleum is 23 percent of Lenin’s body, not 10 percent as Medinsky had suggested. Continue reading …

In this essay, Alexei Yurchak analyzes the project of maintaining the body of V. I. Lenin in the Lenin Mausoleum in Moscow for the past ninety years. It focuses on the materiality of this particular body, the unique biological science that developed around the project, and the peculiar political role this body has performed.

ALEXEI YURCHAK is Associate Professor in the Department of Anthropology at the University of California, Berkeley. He is the author of Everything Was Forever, Until It Was No More: The Last Soviet Generation (Princeton, 2006) and is working on the political history of Lenin’s and other communist bodies and the science that developed around the projects of their preservation.

Snow White and  the Enchanted Palace: A Reading of Lenin’s Architectural Cult
by Jonathan Brooks Platt In 1965 the architect Konstantin Mel′nikov wrote a short memoir of his work on the Lenin Mausoleum, revealing a folkloric source for his 1924 design of the original sarcophagus. Mel′nikov describes his pyramidal glass construction as “a crystal with a radiant play of interior ambient light, suggesting the fairy tale of the sleeping princess.” The reference conflates two literary folk tales: Vasily Zhukovsky’s “Tale of the Sleeping Princess,” a reworking of Charles Perrault’s “Sleeping Beauty,” and Alexander Pushkin’s “Tale of the Dead Princess and the Seven Heroes,” based on the Grimm brothers’ “Snow White.” Mel′nikov likens the embalmed V. I. Lenin to Zhukovsky’s sleeping princess, but his crystal coffin more directly refers to Pushkin’s dead one. Pushkin also likens death to sleep in his tale. Before being placed in the coffin, the princess “lay so fresh, so quiet, / As if under the wing of sleep, / That she seemed only just not to breathe,” and in the end she rises from the coffin with the cry: “Oh, how long I slept!” Applied to Lenin, this image is remarkably potent. Not only does Mel′nikov suggest the dead leader might be resurrected; he feminizes him as the bride of some future hero. Who will come to smash the coffin, awaken the princess, and live happily ever after? Continue reading …

Jonathan Platt’s essay offers a chronotopic reading of V. I. Lenin’s architectural cult and its relation to Soviet sovereignty in the postrevolutionary period, as reflected in the discourse and plans surrounding the Lenin Mausoleum and the Palace of Soviets in Moscow. Central contexts include Andrei Platonov’s novella The Foundation Pit and Russian versions of the “Snow White” tale.

JONATHAN BROOKS PLATT is Assistant Professor of Slavic Languages and Literatures at the University of Pittsburgh. He works on Russian and Soviet literature and culture with special interests in the late romantic, Stalinist, and contemporary periods.