Triple Cross: Binarisms and Binds in Epistemology of the Closet

The first in an occasional series of Untimely Reviews, a format for reengaging with important critical works of the past. 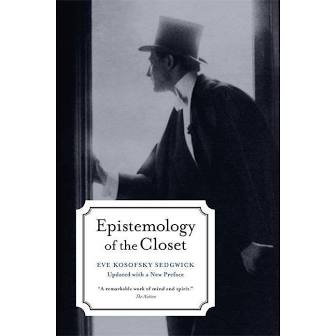 Published in 1990 (with a portion initially written as early as 1983–84), Eve Kosofsky Sedgwick’s Epistemology of the Closet was written in the mid- and late-1980s context of an “open season on gay men” in public discourse (as she put it)—not to speak of gay bashing and an apocalyptic medical crisis. By now there’s an extensive secondary scholarship on Sedgwick’s literary criticism and queer theory. But to my knowledge none of it pursues the thread I’m going to try to draw out here.

Sedgwick’s book remains as exciting to me now as it was nearly thirty years ago—in some ways more exciting, as I’ll explain. I’d still embrace its central argument, stated on her very first page, that “an understanding of virtually any aspect of Western culture must be, not merely incomplete, but damaged in its central substance to the degree that it does not incorporate a critical analysis of modern homo/heterosexual definition” (1), an operation that “intersects every issue of power and gender” and “transforms the other languages and relations by which we know” (3).

Sedgwick didn’t greatly revise the history of that process of definition from about 1890 to 1990, the period David Halperin has called “one hundred years of homosexuality,” of same-sex sexual attraction conceived, as Michel Foucault had emphasized, as a way of being a person—a species, a human natural kind—in the sociocultural and interpersonal fields of eroticism and sex in which “one particular sexuality was distinctively constituted as secrecy” (73). Sedgwick had some critical remarks to make (see 45–47) about both Halperin’s and Foucault’s framing of this history. Among other things, she wanted to imagine histories of sexuality in the modern Western world yet to be fully “known” historically—notably histories of masturbation and “the masturbator” as a sexuality. Nonetheless, in the end her mapping of the definitional field of (homo)sexuality more or less built in—assumed—the original Foucauldian perspectives. (Shortly after Epistemology of the Closet appeared, Sedgwick published an extended examination of Foucault’s perspectives on the history of sexuality and their influence on post-Foucauldian literary and cultural historians; it is useful to read it alongside the earlier book.) Speaking for myself, since the late 1980s (and especially after reading Epistemology of the Closet) I’ve devoted much of my research and writing as an art historian to consolidating—and in some respects to challenging—Foucauldian cultural histories of same-sex desire, which have often tended to privilege textual sources (as distinct from visual representations), to overemphasize the role (and downplay the variety) of medical-psychiatric discourses, and to neglect some of the rich evidence for same-sex sexual subcultures in the eighteenth and nineteenth centuries (if not before).

Of course, Sedgwick was not primarily a social or cultural historian. She was a literary scholar—a reader. In virtuoso readings both of public discourse in the 1980s in the United States and of canonical texts in the traditions of the French, British, and American novel, she set out to unravel the “radical and irreducible incoherence” of the historically emergent modern definition of homosexual personhood (85)—its constitutive contradictions about which, she said, there were “no epistemological grounds” for “adjudicating” or “decisively arbitrating as to their truth.” (Associate Justice Byron White had claimed to adjudicate authoritatively, though in fact his majority opinion in Bowers v. Hardwick was only 5–4; in 2003 it was overturned by the Supreme Court itself in Lawrence v. Texas 539 U.S. 558 [2003]).

Above all Sedgwick identified what she called—and as “queer theory” became in her wake— “minoritizing vs. universalizing” models of sexual orientations and “separatist vs. liminal/transitive” understandings of their relations to gender identifications. In this regard, I reproduce her well-known table of models of gay/straight definition. In Tendencies, a collection of her essays more or less contemporary with the writing of her book, Sedgwick noted that Epistemology of the Closet dealt primarily with the first register—“sexual definition”—and the essays dealt primarily with the second register, “gender definition.” The larger point, of course, is to “theorize gender and sexuality as distinct though intimately entangled axes of analysis.” This might seem blindingly obvious now, but Sedgwick insisted, quite properly, that “new psychoanalytic developments” in late-1980s America (despite the supposed depathologizing of “homosexuality” by official American psychiatry) were “based on precisely the theoretical move of distinguishing gender from sexuality.”

Equally or more important, Sedgwick urged that the “versus” implicitly organizing each register of definition is itself misleading. More salient—more real—is a complex cycling of reciprocities and recursions between the ostensible poles of the putative contradictions (gay/straight, male/female, and so on)—a point to which I’ll return. She didn’t bang on, then, about “nature versus nurture” and “essentialism versus constructivism” in approaches to human sexualities—widely bruited polarizations at the time. Instead, and laying the groundwork for a more recent “intersectional” approach to gendered sexuality, she counseled us to explore the overlapping—the blending and binding—of biosocial phylogenies and sociocultural ontogenies of homosexual desire; of the homosexual-as-species and other sexualities not so naturalized, such as the aforementioned “masturbator”; of gay and lesbian “self-descriptions” that should be awarded “propriodescriptive authority” (27); and of fourteen descriptions of erotic preferences and sex/gender positions and relations that supposedly we all intuitively know and accept in practice in ourselves and in other people (25). Perhaps this last list has dated somewhat. But I’ll still bet on its reliability as a real person’s guide to real life. (Her first item of commonsense wisdom: “Even identical genital acts mean very different things to different people.” Her sixth: “Many people have their richest mental/emotional involvement with sexual acts that they don’t do, or even don’t want to do.”) Continue reading …