In this essay Todd Olson follows an art-historical method, from a formalist analysis of French Classicism derived from the natural sciences to the nineteenth-century biological discourse that identified hidden analogies rather than visual similarities among different specimens, whether they were animals or paintings. Olson shows how an ambivalence to the use of biological metaphors in North American art history may be traced back to this theoretical genealogy. 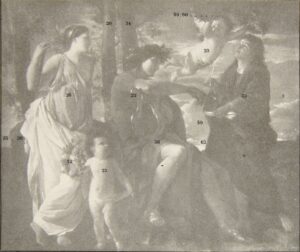 A constellation of numerals is superimposed on Nicolas Poussin’s L’Inspiration du poète. The numbers 35, 20, 26, 12, 23, 34, 22, 36, 59, 60, 62, 33, 9, and 3 are scattered across the surface of the canvas. The numbers may indicate a caption, or, more likely, since the numbers range from 3 to at least 62, they refer to an index. One may also infer that the numbers correspond to motifs in an attempt to provide an iconographic catalog. Yet, the repetition of 20, 23, and 59 reveals a lack of correspondence between number and depicted object. Although 23 refers to the flesh of two putti, 20 marks both rock and tree trunk; 59 indexes two patches of sky.

The transparent paper overlay with the numeric system on the photographic reproduction is one of several in Otto Grautoff’s Nicolas Poussin (1914), a major catalog of the French seventeenth-century painter’s oeuvre. Paintings were numerically compared to one another. Poussin’s L’Inspiration du poète was linked to Les Bergers d’Arcadie: the shoulder of the woman among shepherds and the garland-bearing putto’s skin, the tomb and the patch of rock. The cloth falling over the knee of Apollo and a bacchante’s drapery in the London Triumph of Pan share the number 36; aside from “36,” L’Inspiration du poète and a bacchanal have nothing in common.

The clue to the pattern of numbers cross-referencing the fields in individual paintings with other pictures by Poussin is offered by a chart (Farbentafel) in the back of the book, where sixty-two brushstrokes of oil paint were applied to sixty-two printed rectangles. Grautoff made it possible to analyze Poussin’s palette through systematic chromatic separation, numerical hue assignment, and graphic indexing.

Grautoff and his publishers were caught between the age of engraving and the era of color photography. In the first years of photographic reproduction, black-and-white prints may have sufficed for the analysis of iconography. Ten years after the publication of Grautoff’s book, Aby Warburg famously began creating a photographic archive to display the iconographic specimens in his Mnemosyne Atlas. Warburg traced motifs through time and across geographies, such as the Mithraic mystery cult’s “world-spanning range and force” from the Roman Empire to the Hopi kiva. By contrast, Grautoff’s numbers attend to the formal characteristics of a single painter. Nevertheless, the color analysis of Poussin’s paintings registered the patterns of a complex system. Things, regardless of their shape or function, were sorted out and made commensurate under another differential visual order. The painter’s palette entered a chromatic archive.

Grautoff provided the basis for scientific analysis without regard for iconography. The numerical register of colors reminds us of the diagrams used by the anthropologist John Layard in the 1930s to analyze the impersonal cultural patterns shared by Malakulan dance and graphic art. It would appear that by 1914 a similar rigorous formalism was already in place, which Grautoff was able use to organize the dispersed easel paintings of the seventeenth-century artist into a coherent oeuvre in the absence of documented provenance.

The study of the systematic distribution of color lent itself to the kinds of formal analysis found in the German art-historical tradition of Jacob Burckhardt and Heinrich Wölfflin. In Walter Friedländer’s contemporary folio edition Nicolas Poussin (1914) we find the most explicit association of Poussin with Classicism. Following his teacher Wölfflin, Friendländer established an opposition between the Classical and the Baroque in his analysis of Poussin’s painting. For Grautoff and Friedländer, culture is an impersonal operation.

The author was dead, yet, “Poussin” was hard to kill. Much of the appreciation of the artist in France followed from Honoré de Balzac’s short story Le Chef d’oeuvre inconnu, in which the character of the young Poussin sacrifices his lover, Gillette, in the service of art as Frenhofer’s model. The artist would continue throughout the nineteenth century to be the central organizing principle of the discipline of art history in France. Émile Magne’s Nicolas Poussin, for example, was published in the same year as Grautoff’s and Friedländer’s books. Magne drew on the recent publication of La Correspondance de Nicolas Poussin, edited by Ch. Jouanny, to construct a work of biographical criticism, which complemented his other major work on seventeenth-century French literature, Scarron et son milieu (1905). In this work, Magne sets the classical Poussin as a foil to Paul Scarron, the author of the burlesque Virgile travesti. Many have rushed to Poussin’s correspondence to underscore this opposition: “My nature compels me to seek and love things that are well ordered, fleeing confusion, which is as contrary and inimical to me as is day to the deepest night.”

Based on a reading of the major German publications of 1914, it would appear that Poussin was securely associated with the discourse of Classicism and a formalist account in art history. While Grautoff’s numerical system may now seem anachronistic, his formalist project premised on the dissociation of color from iconography would have a lasting effect. Similarly, Friedländer’s formalist approach to the problem of Classicism was influential in twentieth-century art-historical scholarship in the English language. Wölfflin’s binary of the Classical and the Baroque would hold sway over the association of Poussin with Klassizismus.. By contrast, Magne’s approach to archival research resonated with the study of l’art classique in France, but it did not offer a rigorous theoretical foundation for that scientific project. It would seem that the identification of Classical art with Poussin’s painting was deeply rooted in a formalist approach that based its model of transformation on German rather than French philosophical traditions.

Yet, if we look to the French publications surrounding the acquisition of L’Inspiration du poète by the Musée du Louvre in 1911, a different theoretical lineage of Poussin’s Classicism emerges. While Magne’s archival and biographical approach continued to have a lasting impact on scholarship in France, an important latent French formalist discourse independent of the German tradition was in an early stage of development. In the prewar period, French literary modernism and the natural sciences were aligned, offering a formalist discourse for the criticism of painting that was paradoxically ambivalent toward vision. Form was hidden. Continue reading …

TODD P. OLSON is Professor of Early Modern Art in the Department of History of Art at the University of California, Berkeley, and a member of the editorial board of Representations.. He is author of Poussin and France: Painting, Humanism and the Politics of Style (2002) and Caravaggio’s Pitiful Relics (2014). His current book project is Jusepe de Ribera (1591–1652): Skin, Repetition, and Painting in Viceregal Naples.