Law and Literature: A Virtual Symposium 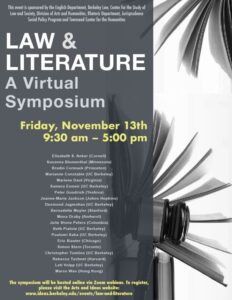 Join UC Berkeley’s English Department, School of Law, Center for the Study of Law and Society, Division of Arts and Humanities, Rhetoric Department, Jurisprudence Social Policy Program, and Townsend Center for the Humanities for a virtual symposium on the intersections between law and literature.

Register here to receive a personalized Zoom link to join the webinar.

A Berkeley Conversation held on April 29, 2020, and available now online

Literature and the Arts in Times of Crisis

Literature and the arts have always had a prominent place in defining who we are as human beings and in making life worth living. This is all the more apparent in times of crisis, such as the one we have been living in. Join prominent Berkeley faculty members from Music, Art History, and English as they share their insights into what makes literature and the arts so critically important to us now. The panelists:

Darcy Grimaldo Grigsby, UC Berkeley’s Goldman Distinguished Professor in the Arts and Humanities, specializes in 18th- through early 20th-century French and American art and visual and material culture, particularly in relation to the politics of race and colonialism. Grigsby writes on painting, sculpture, photography and engineering as well as the relationships among reproductive media and new technologies from the 18th to the early 20th centuries. Her essay on Antoine-Jean Gros’s painting Bonaparte Visiting the Plague-Stricken of Jaffa, which she discusses in this conversation, was published in Representations 51.

Mark Danner is a writer and reporter who for three decades has written on politics and foreign affairs, focusing on war and conflict. He has covered, among many other stories, wars and political conflict in Central America, Haiti, the Balkans, Iraq and the Middle East, and, most recently, the story of torture during the War on Terror. Danner holds the Class of 1961 Endowed Chair in Journalism and English at UC Berkeley and was for many years James Clarke Chace Professor of Foreign Affairs and the Humanities at Bard College.

Nicholas Mathew, a professor in UC Berkeley’s Department of Music, has focused on music and politics in the eighteenth and nineteenth centuries: the place of music in political institutions, the role of music in public life, and the ways in which music produces social attachments and collective identity – as well as issues of political appropriation, subversion, musical trashiness, and political kitsch. Mathew is a member of the Representations editorial board. With Mary Ann Smart, he co-edited the special forum Quirk Historicism (Representations 132), for which the two wrote Elephants in the Music Room: The Future of Quirk Historicism.

Moderator Anthony J. Cascardi is the Dean of Arts and Humanities at UC Berkeley.

The discussion is part of a live, online video series, Berkeley Conversations: COVID-19, featuring Berkeley scholars from a range of disciplines.