Bob Dylan in the Country: Rock Domesticity and Pastoral Song 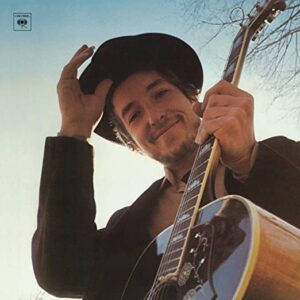 At the close of the 1960s two developments changed the shape of mainstream rock and roll music. The first was a new focus, on the part of a number of influential artists, on music about domestic life—kids, spouses, home. The second was a new interest in blending rock rhythms with instrumentation and themes taken from country music. This essay explores the ways in which these two concerns overlap in the work of Bob Dylan. I argue that Dylan’s work at the turn of the decade offers insights into our own current moment, when the relationship between the public world and the private world is being renegotiated. I show how Dylan’s “country” songs are, in fact, models of self-conscious experimentation that push against the conventions of popular song and highlight the conditions of their own production.

One day, around 1970, John Lennon took a bath. Then he wrote a song about it. “In the middle of a bath I call your name,” sang the composer of “Revolution.” Next, he shared his call with his wife: “Oh, Yoko! Your love will turn me on.” About the same time, Lennon’s erstwhile writing partner, Paul McCartney, went to his second home in rural Scotland to get away from the press. There, the composer of “Eleanor Rigby” got down to work: “Fly flies in, fly flies out,” he sang on his second solo album, Ram. While McCartney was in Scotland, the American writer Paul Simon went to his doctor for a checkup. His song “Bridge Over Troubled Water” had recently stood with McCartney’s “Let It Be” as an anthem of consolation for a generation exhausted by war and political violence. Both tunes had achieved broad success with both white and black audiences—in the latter case, through covers by the soul singer Aretha Franklin. Simon’s GP read him the riot act about his fast living. Simon passed the news on to his spouse: “Peg, you better look around! How long you think you can run that body down?”

What is this stuff? By the end of the 1960s, rock and roll music had generated a canon of powerful songs built around a set of frequently reworked themes: sexual desire, regret, more sexual desire, rebellion, drugs, despair, escape, sexual desire. Now, all of a sudden, major composers in the field were writing about trivia.

The turn to domestic themes on the part of major white rock stars reflects the changing relationship between public art and personal expression at the end of the 1960s. Rock music’s extraordinarily rapid rise to dominance in the field of entertainment was built on images of rebellion and fictions of expanded consciousness. Now it seemed to have run out of steam. In part, it had been overwhelmed by the explosion of spectacle and drama that had taken over much political and social life. In the United States, the violence and confusion that followed the 1968 assassination of Martin Luther King and the Democratic Convention in Chicago dwarfed expressions of youthful rebellion on the part of rich rock musicians. So these artists increasingly showcased themselves, not as rebels or teen-magazine “stars,” but as personalities. Songs about family life, bathing experiences, and dietary regimens began to creep into the canon, and listeners were turned into paparazzi in spite of themselves. The music seemed to be at a crossroads.

The moment has resonance. We now enter our own new “decade” (that conventional unit of pop culture history), and face a set of challenges that have rearranged our relationship to the public world, to private space, and to our understanding of community. The emergence of the COVID-19 pandemic has imposed a new experience of domestic space, as millions of people are compelled to shelter in place and wait for signs of improvement. Daily rituals of bathing (Lennon), home life (McCartney), and self-medication (Simon) replace the public experiences of political gathering (say, “Revolution”), face-to-face conversation (“Hey, Jude”), and street life (“The Sound of Silence”). In our own moment of nesting, not communing is both the prudent and the ethically correct thing to do. And yet, as the massive protests against racial injustice that erupted in May 2020 have also shown, the domestic idyll of self-quarantine is shaped by race and class. Sheltering in place is largely the prerogative of a professional class that remains overwhelmingly white, even as the protests against a segregated society have been strikingly multiracial. All of these factors raise the question of what we can learn from an earlier moment of political upheaval, and from the escapist art that was produced in response to it. Continue reading …

TIMOTHY HAMPTON is Professor of Comparative Literature and French at the University of California at Berkeley. His book, Bob Dylan: How the Songs Work, appeared in paperback in fall 2020. A new study,  The Secret History of Cheerfulness:  Shakespeare to Facebook, is forthcoming from Zone Books in 2021.  He writes about literature, music, and education at www.timothyhampton.org.

In December of 1965, Bob Dylan gave a news conference in San Francisco. Following his rise to fame in the early 1960s as a writer of politically themed “folk” songs, Dylan had caused a stir several months earlier at the Newport Folk Festival by appearing on stage in a black leather jacket, accompanied by an electric blues band. Now he was beginning an extensive tour to play a new kind of music—music that he described in his press conference as neither folk, nor rock, nor folk-rock, but something called “vision music.” In this essay I want to consider what that phrase might mean.

In what follows I will argue that Dylan’s famous turn to “electric music” is part of a larger stylistic shift in his approach to writing and performing—a shift that unfolds across the middle years of the 1960s. Imagery, lyric form, musical structure, and even the dynamics of performance are recalibrated through new strategies that emerge to replace the earlier interest in topical songs. This is what I will call a “visionary poetics.” It places Dylan in a tradition of visionary poetry reaching back as far as Dante. However, as I will show, Dylan’s development during this period takes shape through his dialogue with literary modernism. For mid-1960s Dylan, the visionary is the modern. My focus will be, principally, on the trio of great “electric” albums produced in the mid-’60s: Bringing It All Back Home (1964), Highway 61 Revisited (1965), and Blonde on Blonde (1966). What interests me is less the notion of “poetic inspiration” (often assumed to be part of some generational Zeitgeist) than the development of the specific literary techniques and musical innovations through which Dylan expands his songwriting range. I will trace the ways in which the expansion of his songwriting palette during this period generates a set of aesthetic and ethical problems that place pressure on the forms of popular song.

Certainly, Dylan’s expansion of his lyric range owes something to the work of the Beat Generation and, in particular, to Allen Ginsberg, who was seated prominently at the San Francisco news conference. It was no accident that the San Francisco visit included a pilgrimage to the beatnik mecca of City Lights Books, where Dylan was photographed in the alley behind the store with Ginsberg, Lawrence Ferlinghetti, and Michael McClure. This was the already aging royalty of the Beats, who had, in their own time, rejected the collective activism of the Old Left to pursue individual beatitude or “beatness.” Dylan was bringing Greenwich Village intellectualism to the epicenter of the emerging sensory-based West Coast counterculture, casting himself as the heir to an earlier visionary generation. Yet Ginsberg had been working in a visionary mode from his very first published poems. Dylan now had to make himself into a visionary; he had to develop a new poetic vocabulary and link it to the limited formal capacities of the popular song. The touchstone for any study of visionary self-creation is neither Ginsberg, nor Ginsberg’s idol William Blake, but Arthur Rimbaud. It was Rimbaud who had given first voice to the brand of visionary modernism that Dylan would embrace. It was Rimbaud who had announced that the poet “makes himself into a visionary” (Illuminations, xxx). And it was Rimbaud who had codified, in his letters about poetry, the procedures and limitations of the visionary mode. My discussion here will set Dylan and Rimbaud in dialogue, less as a study of influence—though influence is part of the story—than one of affinity, using Rimbaud’s canonical accounts of visionary poetry as a template for tracing Dylan’s development. Continue reading …

Bob Dylan’s turn from “folk music” to “electric music” in the 1960s involves the development of a new visionary poetics. Through a consideration of his affinity with the French Symbolist poet Arthur Rimbaud, this essay traces Dylan’s recasting of himself as a visionary and studies the pressures placed by this process on lyric form, on poetic diction, and on the representation of the self in popular music.

TIMOTHY HAMPTON is Professor of Comparative Literature and Chair of French at the University of California, Berkeley. His most recent book is Fictions of Embassy: Literature and Diplomacy in Early Modern Europe (Cornell University Press, 2009). He is currently working on a study of the history of cheerfulness.