In reading Henry James’s late novel The Wings of the Dove with Honoré de Balzac’s Seraphita, Amy Hollywood argues that James performs through his novel an act of secular devotion, a memorialization of lost others through which he enables himself to continue to live.

In the eighth book of Henry James’s late novel The Wings of the Dove, the young orphaned American heiress Milly Theale has a party. She has rented a Venetian palace from which she is too ill to leave. She is even too sick, although she refuses to acknowledge it, to come down for dinner. But she will, her companion Susan Stringham tells Merton Densher, one of the three key figures in this (doubly) failed marriage plot, come down after dinner, to a candlelit frescoed room filled with music. (“He had found Susan Shepherd alone in the great saloon, where even more candles than their friend’s large common allowance—she grew daily more splendid; they were all struck with it and chaffed her about it—lighted up the pervasive mystery of Style.”)

Mrs. Stringham insists that Densher stay to participate in what he calls the “court life” Milly and her companion, together with their Italian cicerone, Eugenio, have created. Milly is, Mrs. Stringham insists, a princess. (This has been her refrain for the length of the novel.) But Milly is more than that. When Densher admits all that Milly has done for him and those who attend her court, Mrs. Stringham

promptly showed how this was almost all she wanted of him. “That’s all I mean, if you understand it of such a court as never was: one of the courts of heaven, the court of a reigning seraph, a sort of a vice-queen of an angel. That will do perfectly.” (Wings, 560)

Milly is an angel, and not just any angel, but a seraph, the highest of the angelic orders, one of those who stand closest to God and are fully infused with God’s light and love.

The biblical basis of James’s word choice echoes, of course, the words of the Psalm with which he names the novel. James’s seraph elicits Christian conceptions of the celestial hierarchies as well as nineteenth-century British and American domestic angelology, yet the more direct reference is, I think, to a very specific seraph, the title character of a short novel by Honoré de Balzac, published in the Revue de Paris in 1834, later republished with Louis Lambert and “Les Proscrits” as Le Livre Mystique. James had most certainly read Séraphîta, as he seems to have read all of Balzac’s work in preparation for various essays designed to assess the work of the French realist for American audiences. The Ambassadors, written in 1900 and 1901, before The Wings of the Dove, but published a year after, in 1903, takes Lambert as the name of its hero, Lambert Strether. Other hints scattered throughout The Wings of the Dove point us to Seraphita, as I will show.

But just as Balzac crucially revises his Swedenborgian sources in writing Seraphita, so too does James use Balzac to his own ends in The Wings of the Dove. If the character Seraphita is something like a Swedenborgian angel come to earth, male and female united in one figure (and hence in strictly Swedenborgian terms, a married angel), or, alternatively, if she or he is a human being who has become an androgynous angel before death, Milly Theale is that earthbound angel rendered as an ordinary, if extremely wealthy, American woman. Like Seraphita, Milly is on the verge of death, and she is instrumental in the romantic affairs of a heterosexual couple. But whereas Seraphita longs for death, Milly wants desperately to live; and while Seraphitus does all he can do to bring together Minna and Wilfrid, the two humans who love her, to unite them in love for each other and for God, Milly, wittingly or not, pulls Kate Croy and Merton Densher—who know and love each other long before Milly comes on the scene—apart.

After Milly’s death, Densher lives on, devoted, religiously, to her; his memory of Milly is the sole artifact available to him of her brief life. The religious language is James’s own, as he describes Densher taking the thought of Milly “out of its sacred corner and its soft wrappings; he undid them one by one, handling them, handling it, as a father, baffled and tender, might handle a maimed child” (Wings, 683). The shift in number is both puzzling and crucial; Densher’s thought is singular and multiple. It is his constant wondering about what was in Milly’s last letter to him, a letter he handed over to Kate, who immediately cast it into the fire. He knows it tells him Milly left him her fortune. What he would never know, what he puzzled over and tended, hidden from Kate, “was the turn [Milly] would have given her act.” This “he would never, never know” and “his imagination . . . extraordinarily filled out and refined” that space of unknowing (Wings, 683). Although Densher did not love Milly when she was alive, death renders her the primary object of his devoted attention. He tells Kate he would still happily marry her, yet a part of him will always, Kate knows, tend Milly’s altar, the thought of her now infinite magnanimity. Milly was a seraph in life and she becomes ever more seraphic through Densher’s devotion to her in death.

I do not want to argue that Balzac’s Seraphita provides “the key” to The Wings of the Dove. There is no key to The Wings of the Dove, and a certain part of its mystery will always, perhaps should always, remain. Yet attention to the similarities and differences between Balzac’s and James’s novels, and between Balzac’s novel and its Swedenborgian sources, illustrate or draw out crucial issues in James’s novel and in all of his writing about the living and their relationship to the dead. Continue reading free of charge for a limited time …

AMY HOLLYWOOD is the Elizabeth H. Monrad Professor of Christian Studies at Harvard Divinity School and a member of the Committee for the Study of Religion at Harvard University. Her most recent book, Acute Melancholia: Mysticism, History, and the Study of Religion was published by Columbia University Press in 2016. Devotion: Three Essays on Religion, Literature, and Politics, co-authored with Constance Furey and Sarah Hammerschlag, is forthcoming from the University of Chicago Press.

Technologies of the Novel: Quantitative Data and the Evolution of Literary Systems

Online: Click Here to Watch the Livestream. No registration required. 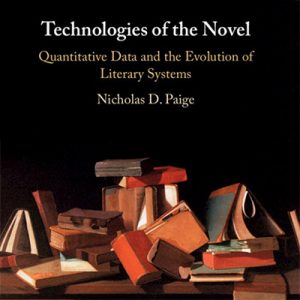 In a study based on the systematic sampling of nearly 2,000 French and English novels written between 1601 and 1830, UC Berkeley professor of French Nicholas Paige asks how, precisely, the novel evolved. Instead of simply “rising” (as scholars have traditionally described its appearance as a genre), the novel is, in Paige’s view, a system in constant flux, made up of artifacts — formally distinct novel types — that themselves rise, only to inevitably fall.

Paige argues that these artifacts are technologies, each with traceable origins, each needing time for adoption and also for abandonment. Like technological waves in more physical domains, the rises and falls of novelistic technologies don’t happen automatically: writers invent and adopt literary artifacts for many diverse reasons. Looking not at individual works but at the novel as a patterned system, Technologies of the Novel (Cambridge, 2020) presents a new way of understanding the history and evolution of art forms.

Paige is joined by UC Berkeley professor of English Dorothy Hale. After a brief discussion, they respond to questions from the audience.