The Sultan Hernán Cortés: The Double Staging of The Conquest of Jerusalem 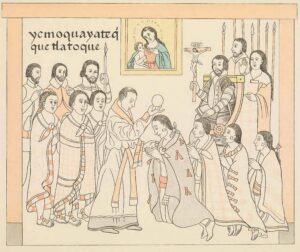 In 1541, the Franciscan friar Motolinía sent to Spain an account of the Tlaxcalan people performing the religious drama The Conquest of Jerusalem in Tlaxcala, New Spain. Previous scholars have read his festival account to reflect only local political interests. In this essay Nicole Hughes argues that the account is a palimpsest, describing both the Tlaxcalans’ ambitious diplomatic strategy, expressed in their performance, and Motolinía’s own efforts to steer Castile’s policies in the Americas and the greater Mediterranean.

The very idea of a “New World” conveys a sense of rupture. Yet the culture of sixteenth-century New Spain is rich in interwoven historical imaginaries. Hall-of-mirrors effects were particularly complex in theatrical spectacles based on Mediterranean battles that featured as characters Turks, Moors, and Catholic knights. It is often assumed that European actors always depicted Catholic forces destined for victory while all indigenous participants played Muslims doomed to defeat. This conforms to the false expectation that, after the conquest, there were only triumphant Europeans and defeated “Indians” in Mesoamerica.

Yet when the Tlaxcalans, the conquistadors’ most famous indigenous allies, performed the drama The Conquest of Jerusalem for the feast of Corpus Christi in 1539, they played many roles. These included Moors and Turks as well as soldiers from Italy and Germany, “Indians” from Peru and Santo Domingo, and the pope. More strikingly still, one of the play’s central characters was neither exclusively Muslim nor Christian, neither wholly defeated nor resoundingly victorious. This is because he is a double character. The Franciscan friar Toribio de Benavente, also known as Motolinía, introduces him as follows in his account of the feast: “[The Spanish army] marched in good order straight upon Jerusalem, and as the Sultan, the Marquis of the Valley, Don Hernando Cortés saw them come, he ordered his people to go out into battle.” Motolinía describes a figure that condenses Hernán Cortés, the Catholic conquistador who led the Siege of Tenochtitlan in 1521, and an Islamic sultan who defends and ultimately surrenders Jerusalem in the drama. The sultan’s paradoxical identity challenges the scholarly expectation of clean-cut opposition, not only between European and indigenous figures in the Americas, but also between figures of Muslims and Christians in the “Old World.”

This article reveals the full complexity of the “Sultan Hernán Cortés” by first focusing on the doubled audience of The Conquest of Jerusalem: the one in Tlaxcala, where this auto, or short religious drama, was performed, and the other in Spain, where Motolinía’s account of it would be delivered to his patron, who was tied to the Spanish court. The sultan himself, and the textual and historical complexities of his character, will reveal the stakes of Motolinía’s text within contemporary debates concerning royal policy in New Spain. Continue reading …

NICOLE T. HUGHES is Assistant Professor of Brazilian and Mexican Literature and Culture in the Department of Iberian and Latin American Cultures at Stanford University. She is completing a book manuscript entitled Stages of History: New Spain, Brazil, and the Theater of the World in the Sixteenth Century.